While I am going to try and limit myself from just posting extreme examples of Mind, Body & Spirit culture here (so that I avoid, at least a little the straw man accusation), I just couldn’t quite resist this one. The image here is striking, and the list of speakers at http://www.divinetravels.com/MayanSpeakers.html seems to really reinforce the view that MBS events don’t mind if the world views they present seem to clash, having Mayan, ISKCON, regression therapy, chakras, an expert in  “Quantum Biology”, psychics, healers, and more. It seems to be philosophically impossible for  all of these to be true at once. They assert a range of seemingly conflicting claims about ultimate external and internal reality. Putting that minor quibble aside, I looked to the event itself.. 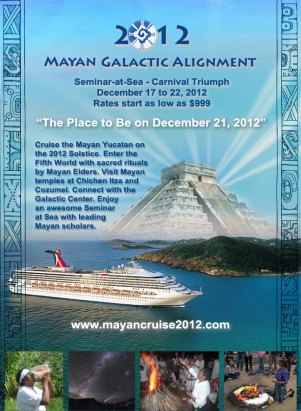 According to Mayan Elders, on December 21, 2012, the Great Cycle, which began in 3114 BC, will end. The Fourth World will pass, and the “World of the Fifth Sun” will be born.

Now catch the crest of the wave. Add your momentum to the vibrational energy that culminates in the peak spiritual event of the Millennium – the Winter Solstice of 2012, which will occur at the incredibly auspicious hour of 11:11 a.m. Universal Time on December 21, 2012.

I had no idea what was being said. Really. I had a comment on the Mayan end of the world thing from a friend. She had visited these sites -and a member of the group had asked about the 2012 prophecies. A local, indigenous tour guide had (I paraphrase) answered: They got the date wrong. The Mayan world did end – when the Spanish came and committed genocide.

This, to me, made the commercial exploitation of this ancient culture seem even more tawdry.

One thought on “Awesome seminars?”